On the densely misty mornings that isolate New Westminster from the rest of the universe, we are sometimes an island floating beyond reach, cut off by a fog suspended above the Fraser River that is ‘thick as mush.‘

On those days, the Skybridge and Patullo bridge seem to defy gravity and arch over to oblivion. Designed by a Colonel Swan, and in some ways as graceful as an open wing, the Patullo bridge was intended as a catalyst for jobs and economic growth during the Great Depression. Now, it’s slated for replacement, based on the same growth mantra as some 80 years ago.

Meanwhile, Patullo traffic roars along McBride Avenue and crescendos to deafening proportions,  like William Blake’s ‘perilous path’ incarnate.  My sister and I walk parallel to that infernal noise at Queen’s Park every day or two,  but we can’t hear ourselves think in the city’s best green space. 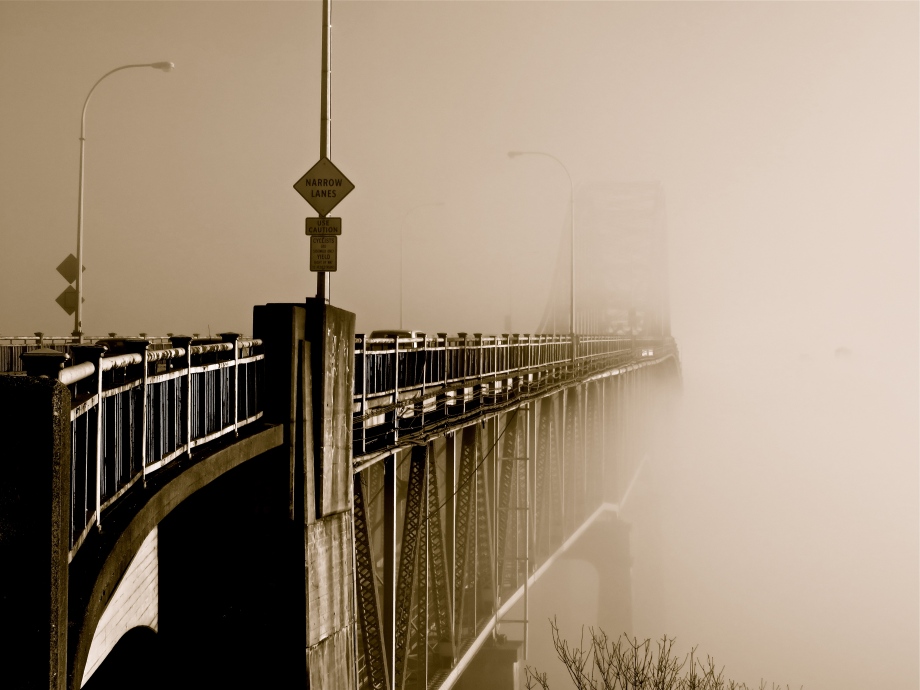 Construction of the Pattullo Bridge in 1937 swallowed up parkland after the BC government found a loophole and appropriated greenspace from the city for a highway approach.

You would think nearly a century later, there would be other, better ways to get the human body over a body of water.

Last year, at last, a bridge you can’t drive across  opened in Portland, Oregon. Now, people can walk, bicycle, and take light transit on the  ‘longest multi-modal, non-vehicle bridge’ in the United States. It would seem we can, if we choose,  reclaim the green, slow things down, listen to silence, maybe even live on a  floating city for more than a few days of the year. There is nothing mystifying about that…